Game mechanics are the engine that keeps Evoke Campaigns running. Inspired by tabletop and digital games, the mechanics inform users how the world in which they are immersing works.

Take chess as an example. The game is governed by a set of well established rules, that establish basic things like “who is the winner” but also complex things like “how does each token move”.

Some examples of rules are:

The rules above are all part of the Game Mechanics of chess. But why stop there? All traditional games have mechanics, like checkers, majong, bingo and pocker. But also newer games like Monopoly, War, Pandemic and Stratego have their own mechanics, that make playing them fun, rewarding, social, strategic and – sometimes – anxiety inducing.

In fact, research has been done around how game mechanics work and one of the findings revolves around the Flow Theory. It was developed by a psychologist named Csikszentmihalyi in 2008 and it states that the difficulty of certain challenges (or mechanics) needs to be inside the “flow” area, which means it cannot be boring but also not extremely anxiety inducing. 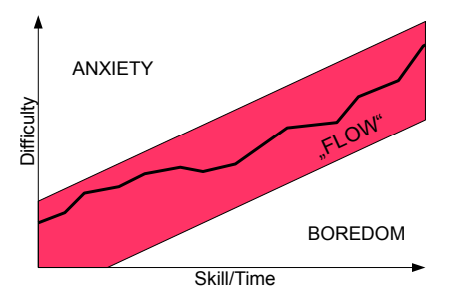 Evoke is also a social game, which means we have students from different realities, backgrounds, ages and mindsets mixed into a virtual space. Our mechanics also ensure they are developing the most, given also their differences, not just similarities. This is borrowed from another academic called Vygotsky, which in the 20th century forged the expression “zone of proximal development” to address the prospective look on how young people could develop their thinking, creativity and learning. On Evoke, with the help of facilitators and mentors, we are always pushing students to their zone of proximal development.

For Evoke, we developed a set of mechanics that live inside the Flow area, being equal parts exciting and rewarding. You can find all of this mechanics in this platform.